One Question is a monthly series in which we ask leading thinkers to give a brief answer to a single question.

This month, we ask:

The question of whether democracy is working obviously depends on what we mean by ‘democracy’ and what we mean by ‘working’. But let me answer the question as naively as possible. By ‘democracy’, let us mean the existing institutions of liberal representative multi-party democracy in most countries that have such institutions. By ‘working’ let us mean ‘doing the thing that they are hypothetically supposed to do’. The definition of the latter is obviously itself contentious, but let us agree that if they are supposed to do anything, those institutions are supposed to translate the express wishes and desires of electorates (insofar as they can be measured) into the programmes enacted by their governments.

From this perspective, it is clear that they are not working and have not been, across much of the globe, since the 1970s. The general neoliberal programme has never enjoyed a clear majority mandate anywhere (except perhaps in parts of Eastern Europe in the wake of the collapse of state socialism).

It has been implemented by governments from the notional Right, elected by an electorate who believed that they would enact socially conservative measures that would slow down processes of social dislocation and cultural change; those governments may have passed some reactionary measures, but they slowed down nothing.

It has been enacted by governments from the notional left, elected by electorates who for the most part expected them to restore and extend post-war social democratic settlements; those governments may have passed some measures to ameliorate the worst effects of economic inequality, but they have rarely passed a measure that would have been recognised as social democratic by even the most right-wing members of their own parties just a decade or two previously.

Such a situation cannot be described as ‘democracy’ in any meaningful sense. READ MORE

Consciousness and the Neoliberal Subject: A Theory of Ideology via Marcuse, Jameson and Žižek (Routledge, 2020) By Jon Bailes

Weapon of the Strong: Conversations on US State Terrorism (Pluto, 2013). By Cihan Aksan & Jon Bailes. 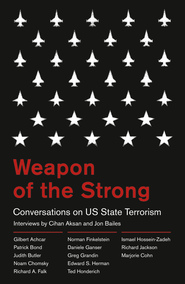